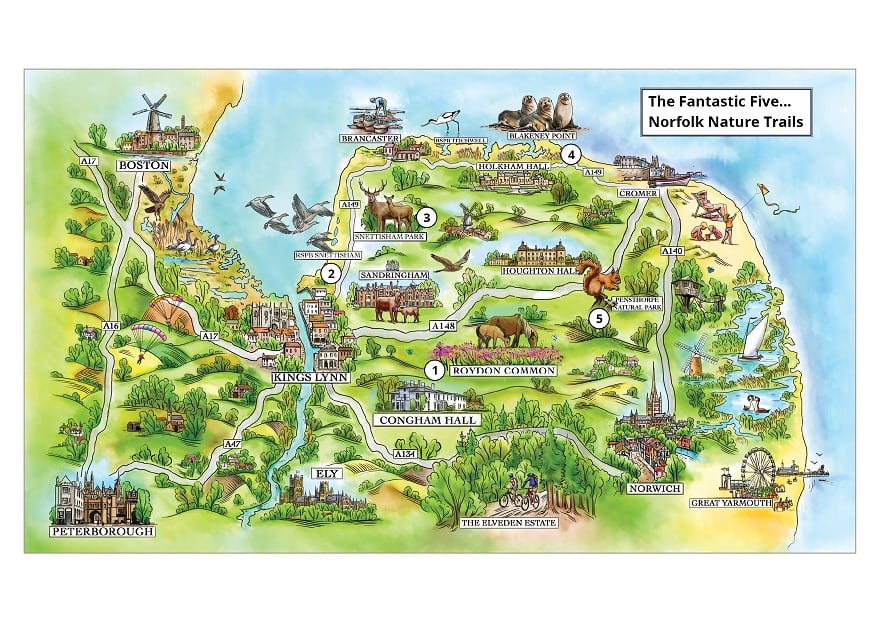 Set off on an easy, three-mile, self-guided walk that will take you through Grimston Warren and Roydon Common, a Site of Special Scientific Interest and the largest surviving open heath in West Norfolk, to discover the reserve’s fascinating winter secrets. On this three-hour circular ramble (walk notes are available at Reception or downloadable at www.conghamhallhotel.co.uk/interesting-walks-in-norfolk ) expect to see Dartmoor ponies and British white cattle grazing on the frost-covered heather – natural mowers brought here to help gently maintain a healthy heath. Hares might also make an appearance in the short grass. While glimpses of Hen Harriers, Merlin and even the Great Grey Shrike are possible sights in the skies above.

2. Pink-footed geese on The Wash

Every winter, the Wash at Snettisham hosts one of the UK’s greatest wildlife spectacles when more than 40,000 pink-footed geese flock here from their breeding grounds in Iceland, Greenland and Spitsbergen. At dusk and dawn, the sky swirls with the wildfowl as they emerge en masse from their roosts to feed on the mudflats. For a closer look, consult the RSPB’s tide timetables – during big tides, the encroaching sea pushes the geese onto the banks and islands in front of the RSPB hides.

Guided ‘Pink-Footed Geese Breakfast Walks’ take place at dawn on various dates through winter, from early November until January. £30.50 per adult (£25.50 RSPB members), £17.50 per child (£15.50 RSPB members). Booking essential: www.eventbrite.co.uk
The spectacle can be viewed for free by following the guidance available at on the RSPB Snettisham website (www.rspb.org.uk/reserves-and-events/reserves-a-z/snettisham/).

Take a deer safari at Snettisham Park, a working farm that’s also home to a herd of red deer. This family-friendly, 45-minute trailer ride features an informative commentary and offers the chance to get up close and hand-feed deer nuts to the animals. At this time of year, the hinds and magnificent stags will be wearing their shaggy winter coats. Safaris take place daily at 11.30am and must be booked in advance. Open daily 10am-3pm, November to Christmas.

This four-mile-long spit is the site of England’s largest colony of grey seals. Winter marks the breeding season, October to January, when the pups emerge covered in silky white fur, and the beach becomes a nursery, where the females feed their young for three weeks before leaving them to fend for themselves. Hard on the heels of pupping comes the mating season, a torrid time on the shingle, when the bull seals fight for territory and mates. Viewing seals is a sensitive pursuit, best done by boat to avoid disturbing the animals, but it’s also possible to follow a three-mile trail out to the colony on foot.

The plight of the red squirrel is well known; their numbers have diminished due to centuries of felling of our forests and, later, a virus carried by their grey cousins. At Pensthorpe, they’re working hard to boost numbers with a breeding programme, as well as reintroducing these animals to the British countryside. Squirrels don’t hibernate and are active year-round – but choose a milder day to ensure they’re not tucked up in their dreys, because there is some good viewing of these bushy-tailed creatures to be had at Pensthorpe’s three large enclosures, which are linked by overhead runs.

and your self guided walk

Get started with your booking, it's as simple as one click... BOOK ONLINE